Firstly, congratulations to Dr. Syed Husin Ali! I’ve had the honour of working with him on a number of occassions, and am delighted that a man of such integrity and caliber is being elected to our Senate.

Secondly, I may be doing some maintenance on this blog later tonight, so please forgive any interruptions you may experience.

Now, like everyone else, I was incensed at Hishamuddin’s utterly idiotic statement that crime is on the rise because we demonise the cops.

I think the degree to which this defies logic and makes no rational sense whatsoever a) shows us once again who exactly is running our country (I mean, I know you have to suck up to the cops, but not to the point of assuming anyone would actually swallow such bullshitla), b) exempts me from ranting too long about it.

Let’s look instead for the real reason crime is on the rise in some good figures YB Tony has produced: 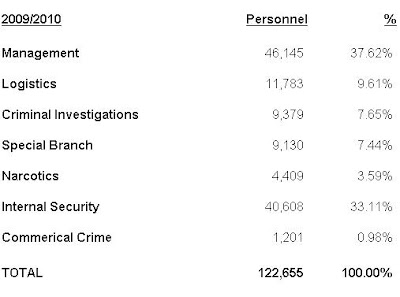 From the above chart, what stands out is the fact that only 7.65% of the police force is specifically dedicated fighting crime, while 33.1% of the force is dedicated to “internal security”, that is the Federal Reserve Unit (FRU), the Light Strike Force, and a “Pasukan Gerakan Am”, which was originally intended to fight the Communists in the jungle! It is almost as if the country is in a state of emergency to the extent that more than 40,000 police officers are tasked to “internal security”.

(If I’m not mistaken, we are technically indeed in a state of emergency still)

Wahhhhh. So almost five times the amount of personnel assigned to investigating crime in Malaysia are assigned to fighting ‘riots’ and… communists? >:|

This is infuriating. Nevermind that we also need almost five times that same amount to manage cops (a figure which apparently does not include ‘logistics’ - a department which also has more cops assigned to it than criminal investigations).

We are a country of some 27 million people. We have only 9,379 cops investigating crime, and almost as many (short only by 249) cops in the Special Branch.